Kesha has allegedly been offered freedom from her current record contract with producer Dr. Luke, but on a difficult condition. She is being asked to deny her rape. Kesha took to Instagram, letting her followers know about this deal.

She added that she will “not take back the TRUTH” and continued, “I would rather let the truth ruin my career than lie for a monster ever again.”

Kesha has received lots of celebrity sport in her testimony, with artists like Lady Gaga and Taylor Swift standing by her. Lady Gaga herself has been very outspoken about her experiences with abuse.

While this legal battle seems like it has been taking nearly forever, Kesha has been keeping herself busy by writing music, and possibly working on an appearance for the television show Nashville. 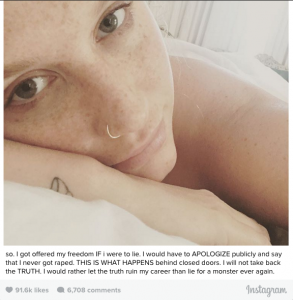