Rita Ora, another suspected love interest of Jay-Z‘s, has come forward on Twitter to debunk rumors following Beyoncé‘s Lemonade. From the tone of the album and specific references to Jay-Z, it’s clear their marriage is definitely not one of the most revered anymore, with many pointing fingers at possible partners Jay-Z may have had. One of these, along with Rachel Roy, is Rita Ora who took to Twitter claiming she respects Beyoncé and basically is not Becky with the good hair. 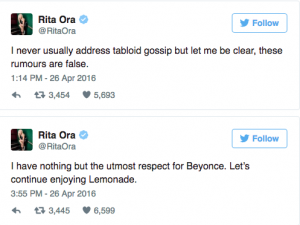 Many thought it was suspicious that Ora has been mentioning Lemonade frequently, and attributed it to her being Becky but with these tweets it seems like she is just fangirling like the rest of us. Many celebs have come forward denying Becky rumors, so we may not even find out who she is. We will definitely keep you updated on any Becky related news!