Calvin Klein isn’t known to shy away from sex appeal, especially with their nearly nude Kate Moss in the 90s. Twenty years later, they’re still keeping the sexy vibe with campaigns that include Justin Beiber. Their advertising has always been sexy but their latest campaign, #MyCalvins, is proving to be the most provocative, NSFW campaign of theirs yet.

The latest Calvin ads have featured the usual suspects, including Kendall Jenner. In one of the ads, she is shown holding a piece of suggestively styled fruit alongside some text, “I Eat In #MyCalvins.” Jenner’s isn’t the only sexually charged ad, though. Kristin Klara’s ad with them features an up-skirt shot with the model wearing a short dress. Abby Lee Kershaw’s ad shows her posing with her hand in her underwear.

Who’s behind this risqué project? None other than London photographer Harley Weir, known for her unconventional an youthful style.

Keep an eye out for these ads, as they will be appearing in fashions mags but you can see some shots below. 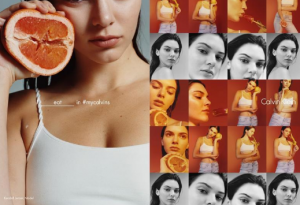 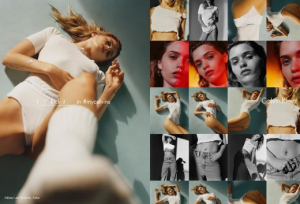