Skip to content
Home » Entertainment » The Return of Jerry Seinfeld

For all of those who watch Seinfeld throughout the 90’s the chance to see him perform in present day is upon us.  The start of 2016 has Jerry Seinfeld, comedian extraordinaire performing once a month at the Beacon Theater in New York City.  He has also embarked on a tour, for those non-NYC natives and there is even talk of a Netflix series with his name on it. 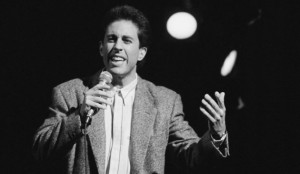