Walk into a bar, see a guy you think is cute, go up and say hello… This has become a totally foreign concept to the dating scene.  These days, its all about internet dating, more particularly, dating apps.  We’ve all heard of Tinder, and know the concept of swiping left or right, as a yes or no mechanism, we’ve also seen other sites such as Bumble, where men let a women know they like them and it is entirely up to the women to decide.  With each new dating app comes a new audience to be targeted. So, whats the newest in the dating app world? MouseMingle.com, “a place to connect people who love Disney and who want the same magic in their relationship.”  Like a Buzzfeed quiz the site asks questions Disney-based questions to gage your happy ending, and helps to match you with your prince or princess charming.  The site was created by Dave Tavres, who was inspired by the single women he saw while working as an Engineer on the Disney Railroad.  Though the concept is a bit unorthodox it is not the first place where Disney lovers can meet and discuss.  It may not bring you true love, or even a date, but at least you’ll find quirky Disney lovers to talk about your favorite 90’s characters. 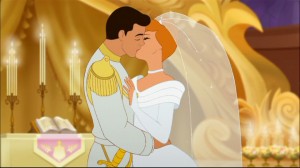 Cinderella and Prince Charming via Cosmopolitan