Legally blonde star Holland Taylor has announced to the world that she is gay and dating… more then just dating she has a serious girlfriend.

The information was revealed after an interviewer inquired into Taylor’s marriage in which she responded:

“My relationship is with a woman, and I have not — given my generation it would not be something that would automatically occur to me. But she’s mentioned it because just from a spiritual point of view, from a heart point of view, as a — as a — as a deed that has a very rich symbolic gesture to it, it has its attraction. But it’s been a very casual conversation at this point. But it’s not — it would be a very private thing. I would not do that publicly. But as a symbol, as a pledge, as a plighting one’s troth I would see it — that it would be a wonderful thing to do.”

We think this is great! Go Taylor!

Even better, is who she’s dating – Sarah Paulson, (32 years her junior) but so effortlessly in love.  The couple has been spotted out to dinner and commenting all over each others social media pages. 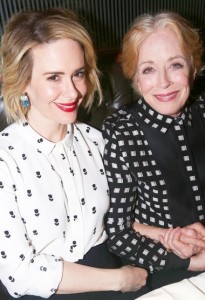 Holland Taylor and Sarah Paulson via US Weekly