Mark Zuckerberg, the creator of Facebook, and his wife, Dr. Priscilla Chan have just welcomed a new addition to the family… baby girl Max, born last week, but that is not the only thing the couple gave life to.  We’re not sure if it’s the holiday season, or the fact that the couple now has a child of their own to care for, but the Zuckerberg’s have officially won “Giving Tuesday”, when they announced 99% of Facebook shares would be going to charity.  The charity’s official name will be the Chan Zuckerberg Initiative, which will focus on “personalized learning, curing disease, connecting people, and building strong communities,” as stated by the couple.

This information was all written in a public letter to their new daughter, to let her know the course of action to participate in charitable projects throughout their lives. There have been mixed feelings on the couples decision to put such a large amount of money into a non-taxable charity, and a bit of scrutiny as to their intentions, but anything being done to help the good of those less fortunate is a happy act of kindness.

We look forward to seeing where the Zuckerberg’s take the charity. 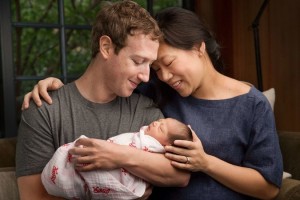