We all remember when the internet went crazy and nearly shut down over the controversial shoot Kim Kardashian did for Paper magazine.  It had everyone from celebrities to politicians, to feminist groups up in arms.  There was good and bad feedback as there always is for any outrageous celebrity action, but no one can deny, the image created a huge buzz and a ton of attention for the reality star turned lifestyle brand.

Flash to the newest Paper Magazine cover, which features Paris Hilton, who has been flying way under the radar.  The “Simple Life” star and heir to the Hilton hotels bared it all, in a similar fashion to her once personal assistant Kim K, hoping for a similar reaction.  Although she looked great, Paris didn’t seem to get the same reaction to her photo, and some are even referring to it as a copy cat, especially after Paris’s comments on Kim’s photo referring to her butt as “cottage cheese stuffed in a trash bag.” All jokes aside, Paris has been recorded as saying,  “we’ve known each other since we were little girls, we’ve always been friends. It’s nice to inspire people. I’m really proud of her and what she’s done” about Kim, and we’d like to think her cover was a copy cat in the highest form of flattery. 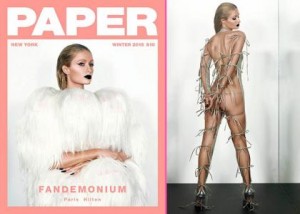