Skip to content
Home » Entertainment » Scott Disick and Kourtney Kardashian, Back Together Again

A few months ago, Kourtney Kardashian and Scott Disick, revealed that they would be splitting up… again.  Scott’s wild behavior and inability to change had pushed Kourtney to her last straw, and so as we’ve seen many times before, they ended the relationship.  This break-up seemed like it would be for good, Kourtney was seen out and about with her sisters and children and Scott, was seen…well partying of course.

Flash to this week, reports of the on and off again couple have come to the conclusion that they are now on again.  Scott has been welcomed back into the family and they stand as a united front.  We’ve seen this from the entire Kardashian Klan as well, when earlier this week Kris Jenner posted a picture praising Scott and his wonderful daddy duties.

It’s been said that the support of his family has helped Scott to get his life back on track and he is well and happy.  It’s great to see them back together again and we wish Scott the best of luck on his continued battle with sobriety. 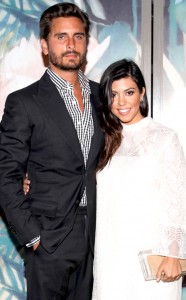