If you watch the Walking Dead there is a chance you have been petrified by the thought that a zombie attack may be upon us… there is even a chance that you’ve started to prepare, but to go as far as biting people, well… that’s when it has gone to far.

Norman Reedus, was attending a zombie horror and comic convention and a crazed fan walked up to the star and actually bit him!  This girl who has told Perez Hilton and other news sources that she likes to refer to Reedus as her husband (totally normal), was taking a photo with him and bit his chest.

“Finally got to meet the love of my life, and get banned from the rest of the CON and lose two more $100 photo ops with him because I lost my mind,” Grover captioned a photo of herself and Reedus, according to Perez Hilton. “I got so excited standing beside him… & just turned my head and bit him! I don’t know what came over me. It wasn’t my intention to hurt him. I’m sorry Norman.”

Luckily, no charges were pressed by Reedus posted a photo to his Instagram in response, just in case any other fans have a similar idea. 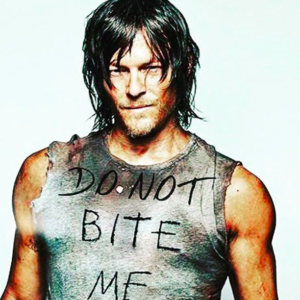