Gigi Hadid, model and Instagram sensation, is now taking on another project, and this one will be the hardest yet.  She is taking on designing and pairing with Tommy Hilfiger to create her own line, which is set to come out next fall and include an assortment of sportswear, footwear, accessories, and even a fragrance.

“We’re creating a line called Gigi by Tommy Hilfiger, using her style, her sense, her social media presence as the top supermodel in the world today,” the designer said.

“I ended up staying an extra five hours the first day,” Hadid said of her time in Hilfiger’s studio. “I think they were surprised I was that into it.” She also admitted that modeling is “not the hardest job in the world.”

If Gigi’s line is anything liker her personal style, we know it we’ll love it. 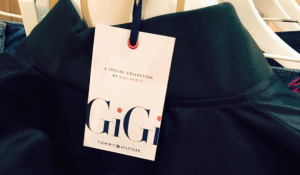