“I am sorry” were the words that came out of Steve Harvey’s mouth last night.  In the biggest television mishap to happen in years.  Harvey mistakenly crowned Miss Colombia, Ariadna Gutierrez-Arévalo… she wasn’t.

Gutierrez-Arévalo did the walk and the wave, only to be told that she was actually the first runner up.  “Miss Universe 2015 is Philippines,” Harvey said, ending the suspense.

In an awkward array of events, the crown was handed over and Miss Philippines Pia Alonzo Wurtzbach, was officially crowned Miss Universe.

In an official statement, Miss Universe pageant officials apologized to both finalists. “The excitement of live TV was evident tonight on the Miss Universe stage with over 10 million live fan votes tabulated,” pageant officials said. “Unfortunately, a live telecast means that human error can come into play. We witnessed that tonight when the wrong winner was initially announced.”

Both contestants held their heads high in support of each other… but what a mistake to make. 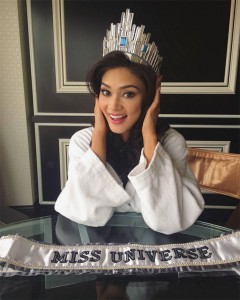