Well, its official, Derek Zoolander has landed his very first Vogue cover, which is no small feat, just ask models such as Gigi Hadid and Kendall Jenner.  What makes this cover even better is who he’s posing with… the always chic and beautiful Penelope Cruz, and his co-star in Zoolander 2.

In the article that accompanies his cover shot Ben said that he now has trouble making a face that isn’t Blue Steel when taking photos. “It’s hard for me to not do it when somebody wants to take a picture with me,” he explained. “I just go into it, like a trained dog.”

We absolutely love everything about this, and all we have to say is you be you Derek Zoolander. 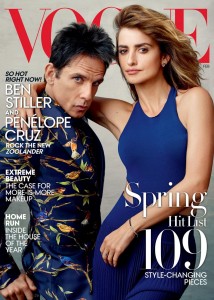