Could it be? The worlds biggest pop star and the worlds biggest movie star may in fact be dating… If that wasn’t a clue enough to who we’re talking about the maybe lovebirds are Leonardo DiCaprio and Rhianna.  Rumors have been flying since the summer when the two were spotted together at a New York Club, and with both now playing in the single pond, a relationship maybe be brewing.

Is this just speculation? We don’t think so, but see for yourself in this picture of these mega stars in Paris. 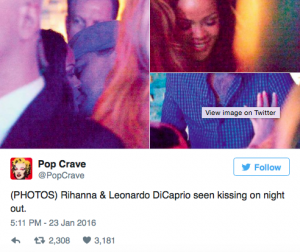