Skip to content
Home » television » Gilmore Girls Revival is Really Happening!
Gilmore Girls is coming back as a four-part miniseries on Netflix. It’s real and it’s happening! Stars Hollow, is back in action
“Nobody here hates each other,” Sherman-Palladino said at the time. “That’s very important…If it ever happened, I promise you we’d do it correctly…It would have to be the right everything — the right format, the right timing, the right way. It would have to be honored in a certain way and I think that if you look around, we would all jump in and do it,”
Star Lauren Graham was also open to it. “I have no idea, that would be up to Amy and other people,” she said. “I think because Amy didn’t get to finish the show there is an unusual willingness to see what that would look like, so we’ll see!” She also tweeted about the news in the fall of 2015. “DUDES. I can’t confirm this,” she tweeted. “But I also can’t deny this…”
Netflix posted this photo to Instagram: 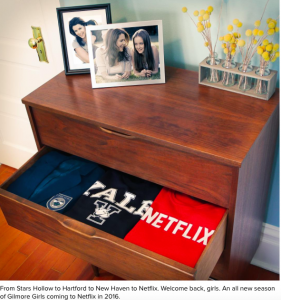