Last night was a blast from the past when “Grease Live” debuted on Fox.  It had us singing along as we listened to some of our favorite old tunes mixed in with some new ones, and the ratings were sky high.  The entire production did not come easy with a show that survived early rain, some tricky costume changes, a terrifying loss of audio and a cast member’s heartbreak (Vanessa Hudgens got on stage just moments after finding out about the passing of her father).  Through trial and tribulations we think they still do a great job… it may not be the Grease we remember but it definitely had its own flair.  Fox added a nice touch to the “Grease” legacy by asking Didi Conn, who played Frenchy in the film, and Barry Pearl, who was Doody, to appear in small roles, and the familiar faces were welcomed whole heartedly.  Its never easy to recreate an old favorite, but for the most part “Grease Live” was nothing short of pretty damn good. 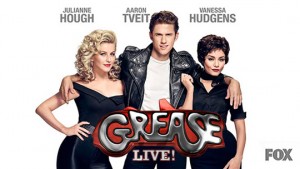