Leonardo DiCaprio seems to be having one of the most eventful awards seasons of his career.  His Lady Gaga encounter nearly broke the internet, and he is now caught in another WTF moment on live TV.  Saturdays SAG Awards, caught Leo doing something never seen before at a live event amongst the biggest names in Hollywood… The camera caught Leo pulling from a vape pen mid-ceremony, and while this would seem normal if he was on a yacht amongst beautiful models sailing through the Caribbean, but he was seated in between Alejandro Iñárritu and Kate Winslet.

Leo, we don’t blame you, after years of attending award shows its nice to see someone not give any you know whats. 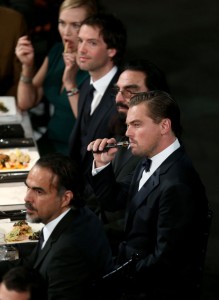