A true tribute is having one of your greatest fans perform in your honor.  It has been announced that Lady Gaga will be performing a David Bowie tribute at the Grammy’s this year and we couldn’t think of a more perfect person to do it.

The Recording Academy released a statement to E! News announcing that “Mother Monster will perform an “experiential” tribute for the late rock star, who will also be receiving a posthumous Lifetime Achievement Award.”

“We had already booked Lady Gaga on this year’s show, but when David passed—almost in a single moment—we knew we had to change direction,” said executive producer of the Grammys, Ken Ehrlich. “We immediately spoke and agreed that she should be the one to honor David. She’s perfect for it. So I reached out to Nile[Rodgers] and, before long, we were on our way to creating what we believe will not only make a great Grammy moment, but one befitting of David.”

Gaga has always proclaimed that Bowie was a huge inspiration to her own music and in a recent interview conducted before Bowie’s passing, Gaga told The Hollywood Reporter: “When I fell in love with David Bowie, when I was living on the Lower East Side, I always felt that his glamour was something he was using to express a message to people that was very healing for their souls.”

We know the tribute will be nothing short of amazing, and we just can’t wait to see it! 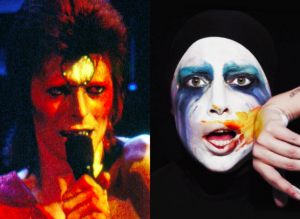