Selena Gomez has lived her life in the public eye, from the awkward teen phase, to break ups to petty girl drama.  She has come out to W Magazine to clarify that she was never feuding at the teenage drama was just too much for her.  The most notable being the girl fight over Nick Jonas.

“We never feuded,” Gomez tells W magazine for the issue’s March cover story. “We both liked the same guy when we were 16. It was just a Hilary Duff–Lindsay Lohan thing: ‘Oh, my God, we like the same boy!’ We are now completely settled in our own lives.”

Gomez goes on to explain how much the unexpected publicity got to her. “At first, I didn’t care,” she tells W. “Then I got my heart broken and I cared. Because people had no idea what was going on, but everywhere it was a million different things.”

Read on for more quotes from W magazine’s new March issue in the pages ahead. 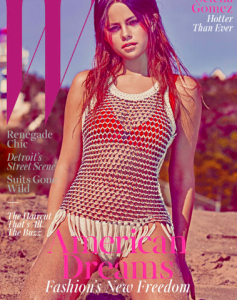