When Playboy announced that they were no longer going to be a nude magazine we thought it was the end of its glossy pages forever.  But, we may have spoke too soon as a cover shot from its new edition coming out in March shows Instagram famous model, Sarah McDaniel with her arm outstretched as though she were taking a selfie (Theo Wenner took the actual photo), combined with the familiar Snapchat overlay and a simple, suggestive invitation that reads “heyyy;).”

“The idea was to look at me from a boyfriend’s perspective,” said McDaniel about the cover. The new image says a lot without saying too much and has guided the magazine to a place where it can be read on the subway or left out on coffee tables.

The new Playboy is geared toward a younger, smart phone focused generation and we have high hopes for the magazine! 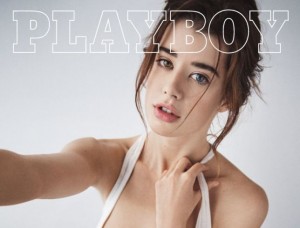