The singer revealed the tracklist for her first record in 10 years on Twitter.

Gwen posted the list of songs along with “This Is What the Truth Feels Like…,” which it would seem is the title for the album. 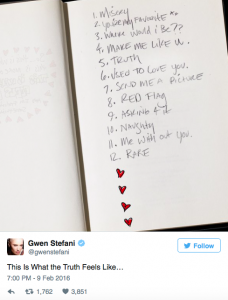 The last solo album Gwen put out was in 2006 – The Sweet Escape, which was a huge hit.

The tracklist for This Is What the Truth Feels Like… is as follows: