Rumors rumors rumors, as of yesterday a huge rumor has been circulating about Cara Delevigne and girlfriend St. Vincet.  The adorable couple is engaged according to gossips all over the world.  So according to a witnesses in Paris who spoke to The Sun, the couple were spotted at none other than Paris’ Eiffel Tower in what could be a fairytale moment.

“There are two lifts going up the tower,” The Sun claims a witness told their reporters, “and they were in the one ahead. As my group got out of the lift I could see Cara on bended knee, clearly proposing to her girlfriend.” The supposed witness added, “It was really touching. Cara obviously likes to do things traditionally,” adding that it wasn’t clear if this was a jest or the real thing.

Obviously if is the real thing we would be thrilled for the beautiful couple, but it is in Delevingne’s nature to be a true joker.  Until, we have a definitive answer we won’t perpetuate the rumors but fingers crossed these two will tie the night. 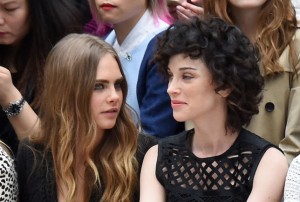