Make sure to grab some popcorn for this one.

The Bros in question: Zedd, Diplo, and Deadmau5.

How it began: Diplo makes a diss at Zedd. Shots are fired. 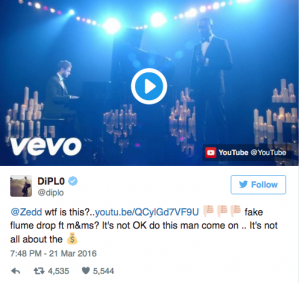 While Diplo is kind of right, Zedd fires back, rightfully so. 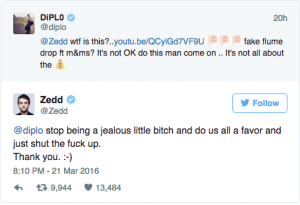 They go on like this for a while, with the argument getting so heated that Diplo deletes the tweets.

Meanwhile, Deadmau5, who has never not wanted to be involved in an argument steps in.

Which turned into this…. 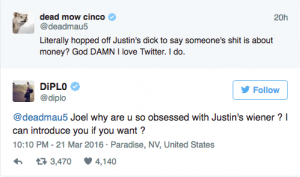 With the ultimate conclusion of this:

I, personally, have heard much better insults from children but this was genuinely entertaining. Until next time (hopefully it will be juicier next time).