The models involved are Madison Stubbington (seated on the couch) and Avery Blanchard (leaning against the wall). 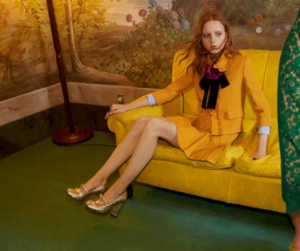 The ASA said Stubbington’s seated photo was acceptable, stating that “unnatural thinness” is a “subjective matter.” They took a very different stand on Blanchard’s photo, and it cannot appear in the UK as the model’s “torso and arms were quite slender and appeared to be out of proportion with her head and lower body,” and also argued that her leaning stance accentuates this disproportion.

It is likely Gucci won’t be using these photos at all, since cruising season has passed and most brands are focusing on spring campaigns at this point.

You can see the video component of the campaign below.