Canadian twin duo Tegan and Sara have released their first single for their upcoming studio album, Love You to Death. The single, entitled “Boyfriend,” is exactly what we needed – an 80s influenced pop anthem.

Sara had a short interview with Zane Lowe on his Beats 1 Radio show, where she talked where they’re at with the record and what the song is about. Sara said, “It’s a pretty straightforward pop song about a relationship that I was getting into with a girl who had never dated a girl before.” She continued, “She had a guy that she was sort of seeing, and we used to joke around that she was treating me like her boyfriend, and I was trying to get her to tie it down.”

You can hear the interview and the song here. Love You to Death is available June 3rd. 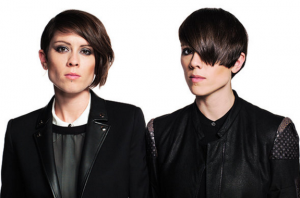