After less than a week of welcoming their baby girl, Chrissy Teigen and John Legend have shared an image of their little one, and she’s adorable. The photo was shared on Instagram for thousands of fans to see, and while baby Luna arrived on Thursday, this was not announced until Sunday. 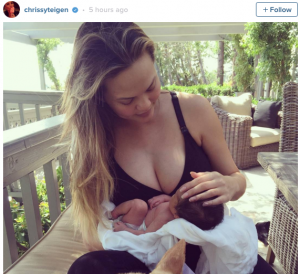 The caption reads, “hi my lulu!” It looks like little Luna has a nickname as cute as her.

Teigen was very open about her pregnancy and used it to combat body issues. This photo shows her taking charge, putting photos up on her phone instead of the paparazzi. Congrats to Chrissy and her husband/new dad John Legend!