If you’re a Kanye West fan, this is a big deal.

Brianni Taylor coordinated and curated the Kanye West art exhibit that is launching in New York City. The exhibit seeks to honor Kanye’s vision and cultural impact, specifically through his album The Life of Pablo, through both music and art.

Just one day after the album drop, Taylor began compiling efforts to arrange the exhibit which will feature music by DJ Q. Shepard and the works of 15 other artists. The exhibit will also feature Kanye inspired treats and guests will be treated to an open bar.

“I look at Kanye West as a visionary,” Taylor said. “I think his music, his videos, his style, his vision as a whole is pretty much flawless. I feel that Kanye is such a great talent, and sometimes people let the things he says via social media or television dilute his real messages […] Kanye is very futuristic, way before his time, he sees things before it happens. I don’t see a reason NOT to have an exhibition inspired by his vision, inspired by him.”

The event is May 19th from 7-11 PM at the Avant Garde by MMC, 319 Grand Street. Check it out and let us know what you think! You can grab tickets here. 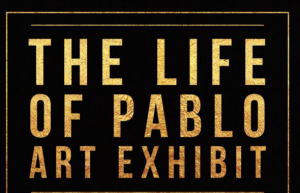