In the past few weeks, Kid Cudi has sporadically released new songs on Twitter and now, we know that it’s because he’s releasing a new album.

Last year, he released Speedin’ Bullet to Heaven following his surprise album Satellite Flight: The Journey to Mother Moon. While Cudi hasn’t said if this album will be in the Man on the Moon series, we can gather judging by the songs “The Frequency” and “All In” that this will likely be entirely separate. 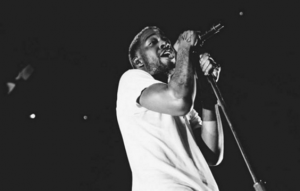