Netflix had recently announced that Neil Patrick Harris would be playing Count Olaf in their upcoming series, A Series of Unfortunate Events. Some sources in Vancouver caught photos of the series’ antagonist looking as frightening as the character in the book, and we approve. We look forward to seeing how Neil Patrick Haris’ and Jim Carrey‘s Count Olafs differ, and where this series will go.

The series will be 13 episodes, however, a release date has not been announced yet. Since filming is already underway, it is a safe bet that we will be seeing a debut in late 2016 or early 2017.

We have included some photos of Neil Patrick Harris as Count Olaf below. Enjoy! 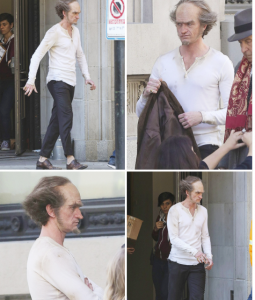