19 year old model Bella Hadid has landed her first Vogue cover, appearing on the magazine’s cover for May 2016 in Turkey.

The photo was shot by Sebastian Faena and styled by Turkey Vogue editor Konca Aykan. The photo features Hadid stepping through a door in an all-white look by Givenchy with jewelry by Istanbul-based brand Gilan.

The young model has been in several major campaigns including those with Marc Jacobs and Balmain. This isn’t her first cover either, as she has been featured on Harper Bazaar Korea among others. It seems like she is in a race with her older sister, Gigi, who has graced 12 covers of Vogue by the age of 21. 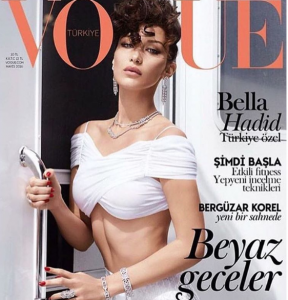