Miley Cyrus was spotted with Liam Hemsworth rocking her once, and maybe even current engagement ring. The two have been somewhat secretive and have only appeared a few times in public, so this seems like the most valid evidence we have for thinking the two are really engaged again. After all, why else would you appear in public together and hang out with in-laws?

The two were on their way to a lunch date with Liam’s mother and father in Byron Bay, Australia. Elsa Pataky, Hemsworth’s sister-in-law also joined them.

There is no confirmation on their engagement but it seems a bit obvious. The two met on the set of The Last Song in 2009, were engaged in 2012, and separated in 2013, to reunite just last year. We will keep you updated on the latest, but it appears this is what we think it is. 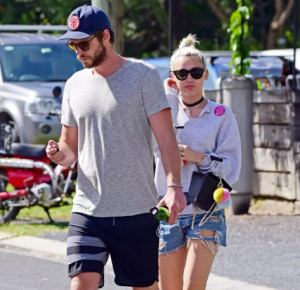