Skip to content
Home » FAME » fashion » Tyler, the Creator’s Fashion Show and How You Can Go

Tyler, the Creator will be presenting his Golf Wang fashion show in a month and unlike most fashion shows, the public will be able to attend by purchasing tickets.

Tyler had shared a link with pre-sale tickets on Twitter with the password as “Tyler” but general admission has already sold out. Tickets for regular seating will be launched next week in addition to standing room only tickets for as low as $55. There is a VIP option of $150 that includes a special gift, but it is not known what exactly that could be.

In an interview with Hypebeast, Tyler said, “I know some people who’s not gonna like this new season and vice versa. You have to make things that you like at that time, because it’s honest and in the future, it’s gonna be a beautiful thing to look back and say ‘wow, why did we make that?’ Or ‘why can’t we make shit like that again? I’m just happy to be in a place where I make a bunch of stuff that I want to wear, and it’s people who think it looks cool too.”

General admission tickets for the event will be available May 16th at 10 AM PT. 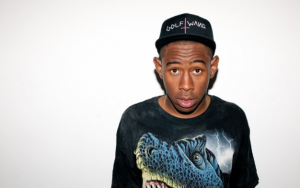