To celebrate the upcoming release of the Ghostbusters reboot film, French boutique colette has teamed up with rapper Nas along with five other brands for Ghostbusters themed items. The rapper is a big fan of the film and contributed some designs from his label HSTRY, which was relaunched in 2014.

Nas spoke to The Source about the deigns, saying, “My side is the clothes and that’s HSTRY and HSTRY deals with everything that’s movies, war, love, politics, people, places, and things, we do all of that. This movie is a part of my history.”

The pieces include some tees with designs inspired by the classic film, some with the lyrics of the theme song and iconic characters. In addition to the tees, Nas helped in designing some hats by New Era, ear buds and headphones by Monster, and more.

You can shop the collection exclusively at colette and here. 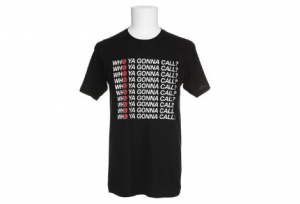