According to TMZ, Johnny Depp and Amber Heard are getting divorced, with 30 year old Heard filing for it citing ‘irreconcilable differences.’ The couple has been married for 15 months, and was separated on May 22, two days before Depp’s mother passed away.

According to TMZ, the couple does not have a pre-nub and that Heard is seeking spousal support for the divorce.

The two met on the set of The Rum Diary and started dating in 2012, and were later married in February of last year.

Many of you are likely wondering who will get custody of their dogs, famously smuggled into the country and featured in their painfully awkward video apologizing for it. We will keep you updated on the details, but we wish the two the best and lots of happiness. 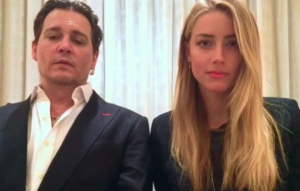