The Strokes released their fifth album Comedown Machine three years ago, and now they’re back with an EP entitled Future Present Past. Singer Julian Casablancas announced the EP on the Sirius XMU radio show, “Culture Void,” where he also premiered the first track “OBLIVIOUS.”

The single was recorded in Austin, Texas and New York and produced by Gus Oberg. The EP also features the songs “Drag Queen,” “Threat of Joy,” and a remix of “OBLIVIOUS” remixed by Fab Moretti, the band’s drummer. The full EP will be available to stream in full today on the Cult Records’ website.

The band also has a pop up shop in New York City. Stop by, or listen to the EP and let us know what you think! 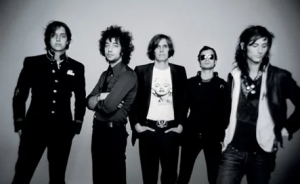