Spoiler alert: don’t read if you haven’t caught up with Game of Thrones!

Game of Thrones is known for its ability to tear hearts in two with out-of-nowhere deaths of our favorite characters, but also for bad ass female characters who go beyond limits placed by their houses and society.

This past Sunday’s episode shows Yara Greyjoy, Theon Greyjoy’s sister, as the first openly lesbian character on the show. In this age, with so much openness about sexuality, this may seem like no surprise and shrug worthy, but this was the first step the show has taken in representing a woman who prefers the company of women over men. After five seasons, this has been long overdue and was simultaneously refreshing. With characters on the show being imprisoned for their sexuality (Loras Tyrell), this was monumental for the show.

We can’t wait to see where this season goes! 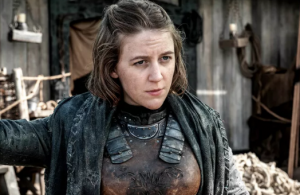