Donald Trump‘s campaign slogan, “Make America Great Again,” has once again been used against him in. This time he is being trolled by American Apparel, with a much better approach: Make America Gay Again. The retailer released its latest gay pride campaign today, in collaboration with the Human Rights Campaign and the Ally Coalition.

American Apparel’s collection seeks to do the opposite of Trump’s campaign, by educating and raising awareness, along with tolerance, for the LGBT community. The line features tees, tanks, a tote, and made famous by Trump dad caps. We love how the company is looking to reverse Trump’s xenophobia and turning it on its head. 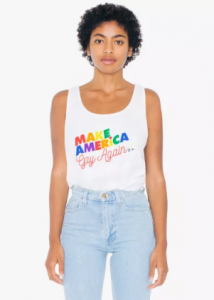