Earlier this week, Nickelodeon confirmed that Hey Arnold!: The Jungle Movie will finally be a thing. The show’s creator, Craig Bartlett, took to Instagram to announce the 2 part, 2 hour project. Nickelodeon also revealed that 19 of the original actors are returning for the movie. Those who voiced Phoebe, Harold, Rhonda, Olga, Mr. Simmons, Grandpa, Grandma, Stella, Eduardo, Ernie, Bob Pataki, Miriam, Big Patty, Coach Wittenberg, the Stoop Kid, and Miles (who was actually played by Bartlett), Jamil Smith, Francesca Marie Smith, and Lane Toran (who voiced Helga, Gerald, and Arnold, respectively) will all return for their roles.

The movie will pick up where the series ended, when protagonist Arnold finds a map that leads him to his long-lost parents. The movie supposedly reveals what happened to his parents, which is sure to be a surprise because in the series we are only given flashbacks. Some mysteries will include will Helga ever address her feelings for Arnold. 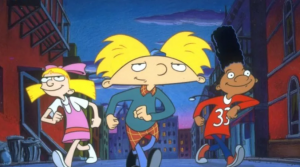