Seahawks quarterback Russell Wilson and Ciara have tied the knot as hubs and wife in a private ceremony held in Liverpool, England according to E! News. The couple got hitched in front of about 100 guests in a castle. Guests were asked to leave their cell phones outside the ceremony so that no photos or videos were leaked according to TMZ.

Jennifer Hudson did post a picture of herself getting ready for an event on Instagram, and it is believed that the event was in fact the couple’s wedding. Her posts featured captions “Here we go guys!” and “Love is your color” which seem like pretty serious hints. The biggest hint was Ciara’s visit to Las Vegas in June for what many think was a bachelorette party.

The couple has fought through custody battles among other issues, but we are happy that they finally tied the knot. Congrats to the newly weds! 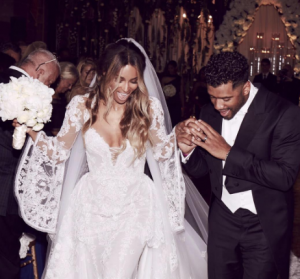