Marvel’s latest addition to its array of superheroes now includes Riri Williams, a 15 year old science genius and she’s taking over as the new Iron Man. The latest installment in the series features the original Iron Man, aka Tony Stark, talking to himself about an MIT student that “reverse-engineered” one of his suits by herself. He sets out to find this person and meets Riri Williams, with the storyline ultimately ending with Williams taking the role of Iron Man.

Marvel has been redefining the comic world, with the inclusion of many heroes of color and women. In a recent interview with TIME, Brian Michael Bendis, Iron Man creator, said that the inspiration for Williams’ character was derived from an unaired TV show he worked on about a “brilliant, young woman whose life was marred by tragedy that could have easily ended her life.”

We are excited to see this series unfold, but in the meantime we have a cover preview below. 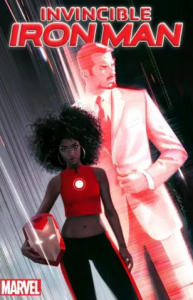