Future and Ty Dolla Sign have done it again, and this time they have collaborated on Ty’s new song, “Campaign.” The track was premiered on Beats 1 Radio with Zane Lowe. “Me and Future did this on our Purple Reign tour on the bus… It’s lit, I can’t wait for the people to hear it,” Ty said.

The two previously worked together on Ty’s single “Blasé,” which also featured Rae Stremmurd and went gold. The two also toured together earlier this year on Future’s Purple Reign tour, which kicked off in February in Madison, WI. The tour ran for about a month and closed in San Jose.

Ty Dolla Sign is now readying his project Campaign, and recently talked to Hot 97’s Nessa about it, saying, ““it’s a movie. Every single song from number one to number fourteen, I gave it my all.” He’s also working on his next mixtape in his Beach House mixtape series. While there are no reported release dates for either of the two projects, it shouldn’t be long before we get some details on them.

You can stream the track here. 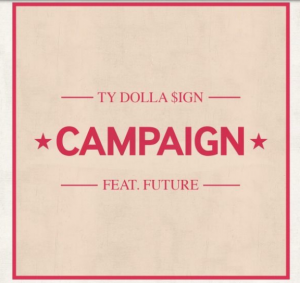