Harlem World USA has had a large impact on Rap culture. Harlem is enriched with culture from the Harlem Renaissance to Rap icons like Camron, Big L, Dame Dash, Max B, Doug E Fresh, and P Diddy.

Rap icons have set the identity of Harlem natives to be individuals that like flashy, and that like money. The neighborhood of Harlem epitomizes the term “money making Manhattan,” and the concept of everyone just trying to make a dollar.

Harlem introduced the world to who the Diplomats were and set the standard of swag dripping everywhere. The Diplomats set trends that are still glorified to date.

Camron dropped his single “I Really Mean It” where he appeared in the music video in a pink truck. The uniqueness and his confidence in doing so set a whole trend. Camron bragged in the song “Dead Motherfuckers” when he stated “I got the whole New York wearing pink” taking full credibility for the trend he set off throughout the whole city, and essentially the whole nation.

Also not to mention Jim Jones had everyone dressed like rock stars, wearing scarfs like hoodies while they were screaming “Ballllinnnnnn.”

Dame Dash is perceived as the ultimate hustler. Hustling his way from a youth to be able to build the empire we all know as Roc-A-Fella Records. Roc-A-Fella Records can easily be remembered one of the most notorious record labels in Rap. Essentially for being launched due to the fact that Jay-Z couldn’t get a record deal, so they decided to sign themselves. Dame’s mindstate and identity as being the ultimate hustler exist to this day.

Dame Dash solidified his identity when he took it to The Breakfast Club to speak on the sense of self-ownership. Dame declared in the interview that a “real boss” puts up their own money, and you’re not a “real boss” until you do so. 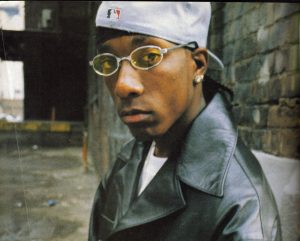