Kesha has returned, with an announcement about an upcoming summer tour on Twitter today, July 19th. The “Warrior” singer asked, “Are you coming to hang this summer with us?” She mentioned she will be playing new songs on the tour that she may never play again, so if you are a Kesha fan this is huge. Tour dates have just been released and it’s only a couple of shows . The tour’s name is Kesha and the Creepes: Fuck the World Tour.

Aside from her recent track with Zedd, the singer’s legal battles with producer Dr. Luke have limited her ability to create new music. Her label is still refusing to drop her from his imprint but she has remained strong and helpful, even after her case was dropped in April in New York.

She promises this upcoming tour will be for the “love of rock and roll in [her] soul” and added that “it’s going to be fucking crazy.” Presales opened up today, so make sure you snag some tickets! 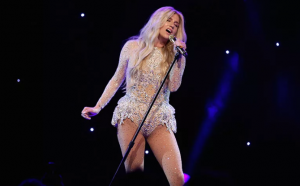