Guess who has the most valuable footwear online? Of course you know, since you clicked the post after reading the title! Yes, it’s true- Kanye’s Adidas Yeezy 750 Boost “Glows” are currently the most valued sneakers online, according to studies conducted by Highsnobiety and StockX. Currently retailing north of $1,400 on the world wide web, these kicks are some of the most sought after items on the online resell market. This beats out Air Jordans 23s and Air Jordan 12s which have been on top for a while. 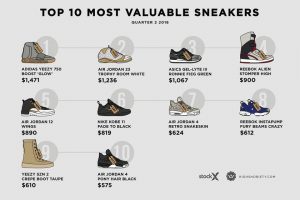 Even with Pablo’s line growing in popularity, Air Jordans overall still reign supreme, holding down 8 of the top 10 kicks currently circulating the cult underworld of resell on the interweb.

With the sneaker market in North America now worth more than $1 billion, the underground resell world is alive and thriving in this economy and it is only growing. It’s going to be interesting to say the least to see what impact Kanye’s line has on the industry as a whole in upcoming years.