Famous tattoo artist Kat Von D and entrepreneur Jeffree Star have engaged in a beauty war after their 10 year friendship. The two are known for their individual makeup brands, with KVD famous for her ‘tattoo liner’ and Jeffree Star for his online business that has reinvented liquid lipsticks. The two are huge in the beauty world, with an amassed 12 million followers on social media.

Jeffree Star is a bit of an entrepreneur, with a clothing line called Beauty Forever and a music career back in the day. He built his empire in the Myspace days, and he hasn’t faded since. His liquid lipsticks often sell out within minutes of their restocking (much like Kylie Jenner’s) and are huge cult favorites. This is where his war with KVD begins, and the story depends on who you ask.

In terms of a makeup empire, it can be said that KVD trumps Star as her brand has been around much longer – since 2008. Her line is widely successful, with her products in Sephora and her shade Lolita is essentially a staple in anyone’s makeup routine nowadays. The shade is actually one of the best selling in Sephora stores. Her career in the makeup industry has not been free of controversy though. She released a lipstick named “Underage Red” which sparked concern, and later a shadow called “Celebutard.”

KVD released a photo of Star with his face crossed out on Instagram, saying, “After years of making excuses for, and rationalizing Jeffree’s inappropriate behavior (including, promoting drug use, racism, and bullying) I can no longer hold my tongue after recent events. I know that over the years, many of you were introduced to Jeffree through me, and regardless if you chose to continue to follow him or not, I just would like to disassociate myself from him and his brand from this point on. I plan on posting a video explanation as to why I felt compelled to make such a statement. But for the time being, I simply want to apologize to anybody and everybody who has ever had to deal with any of his negativity. And yes, with a heavy heart, I will be pulling the shade “Jeffree” from my collection.”

Star retaliated with a serious of tweets, and ultimately a video response to her original video. Star has been criticized for his racist remarks, and bashing customers on Twitter. We shall see what comes from this feud but ultimately, we wish the two the best. 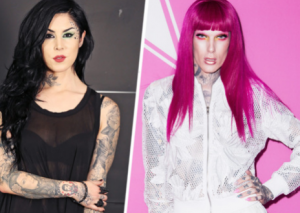