If you haven’t caught up with this latest season of Orange is the New Black, you’re in for a huge surprise, and some heartbreak. Spoiler: beloved Poussey, played by Samira Wiley, is no longer and Wiley is now pursuing a new role in a series by Hulu. Hulu’s series ‘The Handmaid’s Tale,’ based on the novel by Margaret Atwood, will feature Wiley as Moira, a role as the protagonist’s best friend. The protagonist, Offred, will be played by Elisabeth Moss.

Those working behind the scenes for this series include: producers Bruce Miller, Warren Littlefield, Daniel Wilson, Fran Sears and Ilene Chaiken. If you haven’t read the book, I won’t let any spoilers slip, but you real out to read the dystopian work especially before the series premieres. We trust that this crew will be the perfect fit for this, and can’t wait to see what’s next. It is set to premiere next year on Hulu, but we will keep you updated on any trailers, additional exciting castings, etc. 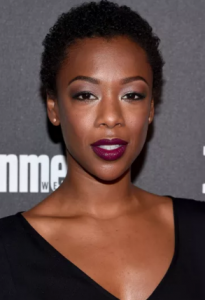