The hottest hold-and-cold couple Tyga and Kylie Jenner are now another car deep into their relationship. In a video posted to both her Twitter and Instagram accounts, Kylie shows that Tyga helped her celebrate her 19th by buying her a black Mercedes Maybach.

In her “Thank you baby” captioned video, Kylie shows Tyga singing her happy birthday during the big reveal. Last year he gifted her a $320,000 Ferrari and Mercedes G-Wagon for her birthday. It was later discovered the Ferrari was purchased in her name, and many wondered if he even paid for it at all. The other, G-Wagon, was previously owned by his ex and he claims he never gifted it to Kylie, she was just driving it around. The G-Wagon was almost repossessed due to lack of payment on Tyga’s end. He allegedly filed bankruptcy in 2010 and has been sued for not being rent for several of his homes. Jenner is rumored to have loaned him a hefty sum of money but asked for it back after their split.

Their relationship has been on-and-off for quite some time with the two reportedly breaking up in November of last year. Now that they’re back together, let’s hope this isn’t a regift, and that it’s a REAL gift. Happy birthday, Kylie! 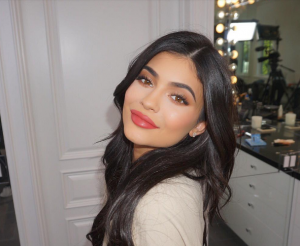