In 1997, a group of guys linked up for a self-titled debut and rocked our world. Their names are Chris Kirkpatrick, JC Chasez, Lance Bass, Joey Fatone, and some guy named Justin Timberlake. It’s been 15 years since their last release Celebrity, which means a reunion is a must at this point. We were given just that for JC’s 40th birthday.

Kirkpatrick celebrated 4-0 four years ago and now it was JC’s turn. While it was his birthday, it was a gift to all of us that they reunited. According to TMZ, they did do a bit of a performance but chose to sing “Happy Birthday” instead of any of their hits. TMZ also reports that Justin Timberlake kindly asked a member of the paparazzi to “shut the fuck up” as he left the location of the celebration in Los Angeles, while Fatone was “”friendly and hilarious and clearly somewhat intoxicated.” Sounds like *NSYNC to me!

Who’s with me in signing a petition to get them back together? 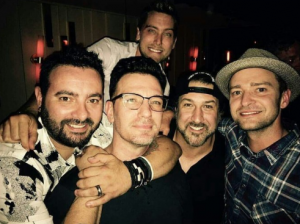