On Saturday, the singer Adele decided to address rumors about a performance at the Super Bowl this year. She revealed that contrary to recent reports, that she won’t be performing at this year’s Super Bowl half time show.

“I’m not doing the Super Bowl,” Adele told the audience. “I mean, come on, that show is not about music and I don’t dance or anything like that.” Despite the disappointment the Los Angeles crowd felt that night (along with the rest of the United States), the crowd really appreciated the artist staying true to herself and her vision. She shared that the NFL did in fact reach out to her about the gig, but that she kindly declined.

She also took some time to address some pregnancy rumors, saying, ““F*cking stupid rumors.“They’re so f*cking stupid.” All hail Adele and her badassery! 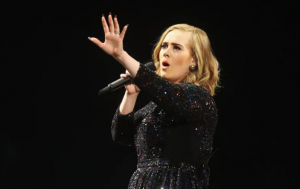