Skip to content
Home » FAME » Entertainment » No Clowning: ‘It’ Preview is Terrifying

Just how terrifying clowns are can only truly be conveyed in film (seriously, have you seen that one season of American Horror Story?) and the perfect movie for this: Stephen King’s It.

Entertainment Weekly released the latest peek of Stephen King’s brainchild and It protagonist, Pennywise. The harmless clown is portrayed by Bill Skarsgård (Hemlock Grove) in the remake. EW also had a quick chat with costume designer Janie Bryant, who designed the infamous clown’s garb. She spoke about the inspiration behind the reinvented costume and said, “There is almost a doll-like quality to the costume. The pants being short, the high waistline of the jacket, and the fit of the costume is a very important element. It gives the character a child-like quality.”

The film is set to be one of the biggest of 2017, and it will be rated R for reasons that are unclear. It is being directed by Andrés Muschietti following Cary Fukunaga’s mysterious exit. It arrives in theaters September 8th, 2017 and we cannot wait. 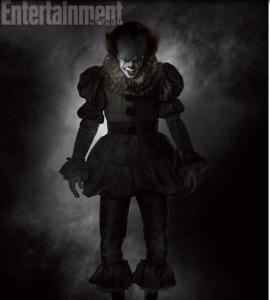